In 1992, CANStruction was founded with the intent of building life-sized structures made entirely of canned goods with proceeds benefitting local food banks. Seventeen years after the national charity’s founding, Schmidt Associates employees joined the local CANstruction chapter’s effort, getting inspired to do good for the community while exercising creativity. One of the first sculptures constructed was the “Taj Ma-Stall,” which paid homage to Senior Project Architect and Principal Steve Schaecher’s book “Outhouses by Famous Architects.” 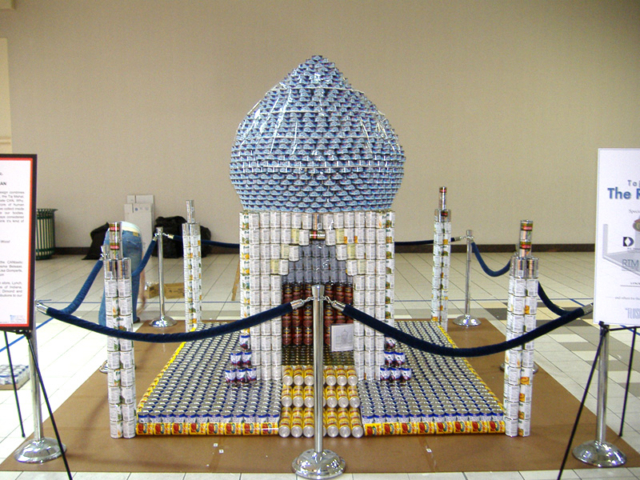 Using this year’s theme of “Iconic Indiana,” the team set out to build something unique to Indiana history that would be popular and embrace the Hoosier spirit.  The team literally took one giant leap for mankind with “Indiana’s Star Explorers,” celebrating the lives and contributions of  Hoosier astronauts. Creating a detailed rendering using Rhinoceros 3D® and Grasshopper® architectural modeling software, the team determined what type of a design would read well as a canned structure and did the math on how many cans of food it would take to build.

“We wanted to do something interesting enough for a win,” said Graduate Architect, Meghan Miller. “With design help from Architectural Graduate Daniel Klemen, a detailed rendering was produced, which served as our outline for the build.”

Next, it was time to organize materials and fundraise with a series of events such as a scavenger hunt, cornhole tournament, and gift basket raffles. On August 6, the team spent the day building a life-sized astronaut currently on display at the Indiana State Fair in the Agriculture Horticulture building. The day of the build presented surprises, including the discovery that some materials had bend to them. The team spent time on-site working and revising the design to get it right, including tweaking the astronaut’s arms to look more natural. In the end, the team used 4,511 cans of food to build the astronaut, which is enough to feed 3,083 neighbors in need.

The final sculpture—which won the Structural Ingenuity Award—used 4,511 cans that will be donated to Gleaners Food Bank following the fair.

A few past Schmidt Associates CANstruction builds (from left to right): Chinese Dragon in 2017; A Race Against Hunger in 2016; Dr. Who Takes You from Old to New in 2014; Souper Bowl for a Super City in 2011